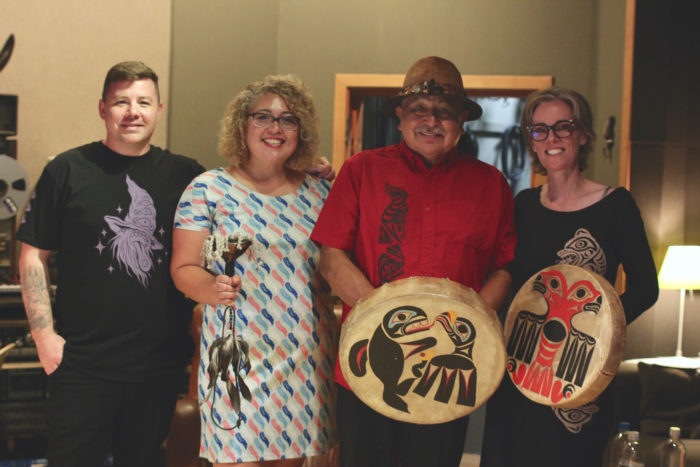 Above, from left: Rob the Viking, Sophia Seward-Good, William Good and Aunalee Boyd-Good in ‘the Chamber’ studio in Nanaimo. Photo by Raymond Knight.

When my sister Sophia and I first embarked on a journey to create original music for our fashion company’s first major runway show, we didn’t realize how transformational it would become for our Coast Salish family.

Ay Lelum – The Good House of Design made our debut at Vancouver Fashion Week in the spring of 2018. When we were told that we would need to provide original music to go with our collection, we happily accepted the challenge as a way to reconnect with our Snuneymuxw songs and language.

Growing up, we both participated in choirs, music lessons, classical training, church singing and cultural event performances, so we figured this would be a good way explore our own music within our varying backgrounds.

Our father William Good is an artist, performer and knowledge-keeper from the Snuneymuxw Hereditary Chief Family, so we had his own roster of songs to record with him.

Our late grandmother Hazel Good was a language teacher, so we had the desire to expand our scope of the Hul’q’umi’num’ language, and this fueled the creative process.

So now, having decided we would incorporate our family Snuneymuxw songs into our final mix — much as we incorporate our Snuneymuxw artwork into the clothing — we weren’t quite sure how to proceed with production. During a planning meeting, it was our brother and feature artist, Joel, who casually said: “Well, go see Rob the Viking, he’s back in town.”

Rob The Viking grew up on Gabriola Island and had come home to Nanaimo to set up a recording studio in the heart of the city. Being a multi-platinum and Juno award winning producer with Swollen Members and Madchild, this world-class producer humbly accepted our request.

In a hidden-away studio dubbed “The Chamber,” the magical process of permanent historical documentation, Hul’q’umi’num’ language revitalization, research and the beauty of song began.

We have now worked with him on numerous songs. Since the beginning, each song has progressed in its complexity to becoming a modern-style Coast Salish symphony with Rob the Viking as our maestro. In his brilliant command of composition that honors all of the traditions set forth, including song, storytelling, language and cultural protocols, Rob the Viking has been the perfect fit as our brother foresaw.

Songs are recorded in their entirety with different levels of harmonies and then remixed utilizing modern techniques, using traditional instruments, such as drums, rattles, shells, and others to create multiple layers and different elements of orchestral complexity. To honor our father’s teachings of the power of the sacred red cedar that he carves, you can often hear the sounds of the knife cutting through the wood incorporated into the beats, bringing the cedar to life in sound while it is recorded in the process of transforming into visual art itself. Creating visual art and music simultaneously is the most thrilling aspect of the months-long, grueling process of creating a showcase for the runway for Ay Lelum. Once the beats drop at Vancouver Fashion Week and the garments are walked down the runway, modern storytelling begins.

Artistic collaboration is not new to us at Ay Lelum, as a second-generation Coast Salish design house, we had watched our parents partner together, and partner with other creatives, growing up. There is a beauty and relevance to artistic collaboration, especially when cultures are blended in multimedia of this kind and this is a cornerstone of Ay Lelum production.

A parallel process unfolds with the garment production, where we create in this process while we record our music. This form of modern collaboration provides proper historical documentation, as without it, the artwork would not be digitally documented, the songs would not be recorded, and this risks the story not being told.

In the beginning, our younger family members were unfamiliar with our father’s songs, and since this musical collaboration, all of the generations of children know and sing their grandfather’s songs. This has proven to be a success, bridging the intergenerational gap so that the next generation has familiarity, upbeat positive memories and knowledge of art, song, and Hul’q’umi’num’ language.

At the same time, the use of Hul’q’umi’num’ language at the recording studio evokes memory for our father, and as we often use neighboring dialects we had researched, our father is able to recall and teach us some of the Snuneymuxw dialect.

The use of multiple dialects is being featured in our upcoming work we excitedly created with Rob the Viking for Vancouver Fashion Week’s Spring 2020 showcase, where we deliberately incorporate three versions of the same word. This is a modern way to preserve culture, pass family history and song on to the next generation, as well as share with the community. With having eight songs remixed as part of our previous three showcases, our 2020 collections will bring us to around a dozen songs that we have created with Rob the Viking. The debut of our 2020 songs will launch at our Spring 2020 collection called Nan ch ‘uw’ nu stl’i’~I Love You/I Hold You Dear, being showcased at Vancouver Fashion Week on Oct. 12 at the David Lam Hall in Vancouver. In this showcase, we also feature music from our family group, Footprints of the Wolf, honoring three generations of women in the Good family who routinely perform together. Our full showcase will also be available to view on our website, www.aylelum.com and on our company Facebook page.

Exploring modern musical media to share Coast Salish song, storytelling, art, language and culture has made us modern storytellers within our father’s teachings and guidance. This is all done with the respectful collaboration of others in the community, such as Rob the Viking, who has shared his expertise to be a part of Indigenous cultural revitalization in an honorable way, creating a new sound — a Coast Salish symphony.

Aunalee Boyd-Good is a co-founder of Ay Lelum – The Good House of Design, a second-generation Coast Salish Design House from Snuneymuxw First Nation. She is a classically-trained vocalist, works as a Certified Optometric Assistant and holds a Bachelor in English from Vancouver Island University.