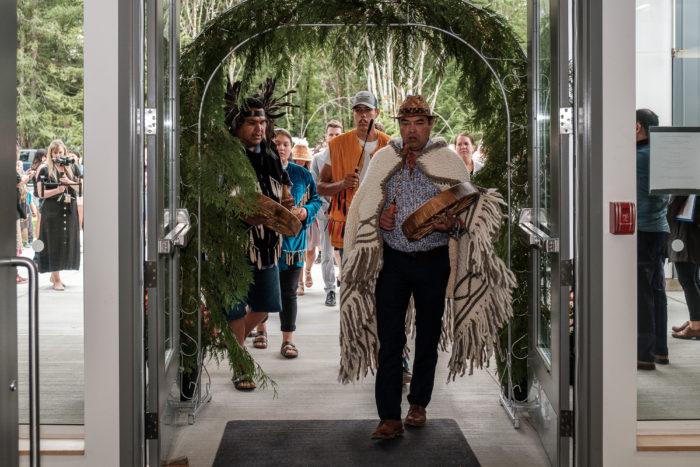 An innovative new school that blends Snuneymuxw teachings with school district curriculum has opened its doors to K-7 students.

The Qwam Qwum Stuwixwulh School welcomed both Indigenous and non-Indigenous students in September with a focus on Hul’q’umi’num’ language, Snuneymuxw culture, and land-based teachings.

The facility in Cedar, B.C., is the result of a partnership between the Snuneymuxw First Nation and School District 68.

Its opening was the culmination of decades of negotiations between elders, school district administration, Snuneymuxw members and local school staff.

During an event on August 30, Chief Michael Wyse said that though many Snuneymuxw members have gone on to significant academic success, as children they were required to attend school for a number of decades “in a makeshift facility squeezed between a railway and the main road of our community.”

The nation’s new school models a form of co-governance between SFN and SD68 that is nothing less than a transformational form of education, he said, adding that it not only shares their story and honours a shared history, but also values the Snuneymuxw way of life.

“This type of education will be carried by all students who attend this new school for the rest of their lives,” he said. “Together, we embark on a better way.”

The completed $10.8 million state-of-the-art modern building encompasses the design features of a longhouse, accommodates up to 70 children from Kindergarten to Grade 7, and delivers traditional teachings using the latest technology.

The road to success was not always easy, said principal Kevin Brand, who delivered a speech at the opening in Hul’q’umi’num’ and also works at Qwam Qwum’s sister school Bayview Elementary. As concepts like reconciliation gain traction, schools like Bayview have strived to incorporate Indigenous teachings into the classroom.

However at its core, he said, the curriculum is still not wholly founded on the traditional ways of knowing that communities like Snuneymuxw hold.

“That’s an uneasy tension, as somebody who knows the power of those teachings for our children and the sense of belonging and wholeness that those teachings create,” he said.

What this new school represents then, is a call to go back to a different foundation — that of the ancestors.

“We’re going all the way back to those values, as best as we can translate them, and recognizing that when we do that, we see abundance, we see beauty, we see community, we see wholeness, we see wellness,” Brand said.

“The nation has waited a long time for this moment where we’re removing barriers, actively, as a school district and partnering in good ways with the BC Ministry of education to choose better, and go back to a foundation that does work for all students, including our First Nations learners.”

The crystallization of the concept behind the school and its partnerships came in March of 2018. As workers broke ground on the property to begin construction, representatives from Snuneymuxw, senior school district management, school board trustees, members of CUPE, and the Nanaimo District Teacher’s Association traveled to observe an Indigenous choice school that had opened in Prince George.

While sitting around a table together, SFN Councillor Emmy Manson said: “We are not broken. Don’t try to fix us” — a comment that Brand and others in attendance took to heart.

Brand said the remark was not only a nod to the deficit-style thinking that has pervaded discussions around Indigenous school systems, but also a way of acknowledging that lower graduation rates among Indigenous students is an indication that it is the system that needs to change, not the children.

“What’s actually broken is the system, the institution, the ways of doing education that doesn’t align with who we are. And bottled within that is all sorts of broken trust that has influenced communities — and rightfully so,” said Brand.

“And how do you restore that? By consistently demonstrating respect and openness and having schools be better at reflecting the values of the community that we serve.”

The foundational framework of the school and its curriculum can be found within the Hul’q’umi’num’ expression “syeyutsus,” which encompasses the idea of both living within the teachings of the land and Snuneymuxw people, while grappling with the complicated nature of modern society as it morphs and changes.

For local mother Mikiala Morgan, the philosophy that underpins the new school and the resources it makes available represent significant opportunities for her eight-year-old son Zachary.

“This is definitely a major upgrade, and once I saw it, I really wanted Zachary to be a part of it. I like that it’s really into our culture,” said Morgan. “It makes me feel better that he’s going to have it later on in life.”

Another feature is the on-reserve location that can be walked to, she added. As a single mother, the in-house hot lunch program that features balanced meals also makes life easier.

Chief Wyse said at the old school, which was not part of the school district, it was always tough to make ends meet. Now, he is optimistic that the school will create opportunities for children that have been missed in the past.

“We’ve made a tremendous step collaborating our partnerships with School District 68 and having that availability of what other schools receive, to provide that education,” he said.

“What’s of utmost importance to us is the curriculum, in providing our culture and our language to our children.”