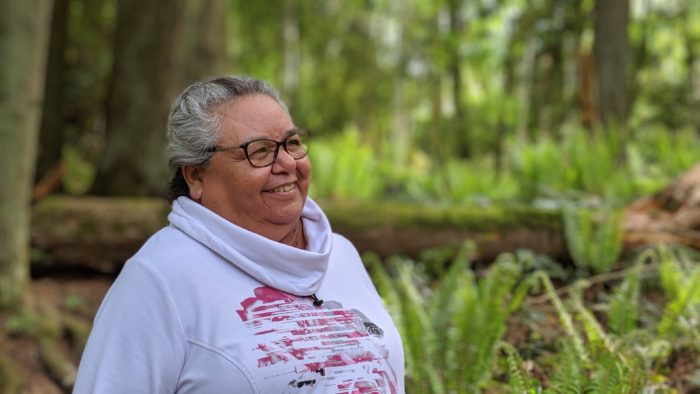 Above: yutustanaat Mandy Jones at Hwsaaqw’um (Holland Creek) during the final stages of documenting for the Google Earth Voyager project. Photo by Brian Thom.

Yutustanaat (Mandy Jones) of Snuneymuxw First Nation is being featured by Google Earth as part of the UN’s International Year of Indigenous Languages.

As part of the initiative, yutustanaat was recorded speaking words, phrases, a proverb and songs in the Hul’q’umi’num’ language.

Yutustanaat is a language teacher and involved students from Ladysmith Secondary School to record the audio clips.

“Our language is very healing,” she said in a statement from Google.

“It brings out caring in our people and helps our students be strong, because the language comes from the heart.”

In another, she explains the scope of Hu’q’umi’num’, which is spoken in Coast Salish communities on Vancouver Island from Nanoose Bay to Mill Bay.

Brian Thom, an anthropologist from the University of Victoria, worked with yutustanaat on the project.

Thom has worked with Google Earth developers in the past, advising them on a new capacity to play audio clips earlier this year.

The language initiative is part of the Google Earth Voyager series and incorporates that new capability — allowing the user to click on pins on a world map to hear the Indigenous languages that are tied to different territories.

For this project, Thom and the Ladysmith Secondary School students recorded “quite a bit” of tape, he said, including songs and stories. In the end, Google Earth Voyager featured three.

“We actually had the kids ask Mandy the questions to elicit her answers in the language,” he said.

“They all got together and sang a couple of songs in Hul’q’umi’num as part of the project.”

Thom said the project is now moving towards its next iteration which he expects will involve the addition of more Indigenous languages from different communities in Canada and worldwide.

Though it isn’t likely to turn into a comprehensive inventory of every Indigenous language, he said, it will educate countless people on what the languages are and what they sound like.

“This is an awareness and solidarity building campaign,” he said.

“It’s a real celebration of the languages.”

People from communities or organizations who are interested in having their language profiled through the initiative can express interest by clicking on a form directly in Google Earth Voyager and filling it out.

The “Celebrating Indigenous Languages” project is viewable at http://goo.gle/indigenouslanguages and via the Google Earth App.