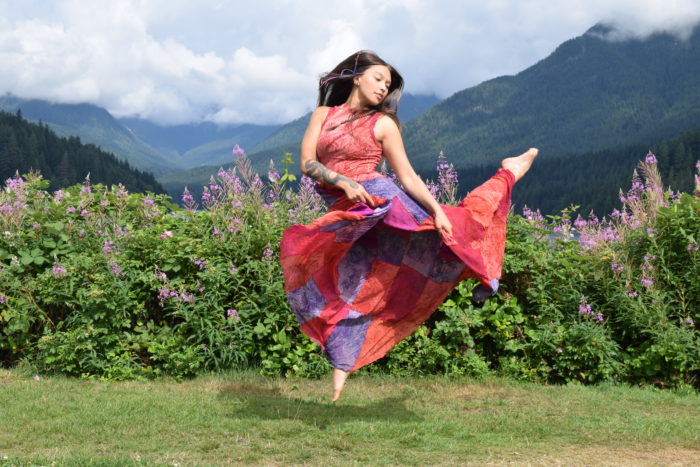 Photo: Sierra Tasi Basker (Gesuqwaluck) of Squamish Nation in a dress by Sans Soucie and earrings by Giggy’s Beads. Photo by Cara McKenna.

When Sierra Tasi Baker (Gesuqwaluck) was a child, she recalls going to a museum with her parents shortly after returning from a family potlatch.

Looking into the display cases at the B.C. Museum of Anthropology, Tasi Baker was distraught to see the same cultural objects that were just utilized by her relatives trapped behind glass.

“It wasn’t as progressive as it is now, so all of the write-ups said things like: ‘back in the day…,’ [putting us in the past],” she said.

“And I was like, ‘but last week my uncle was wearing that mask.’ I was so confused. It really upset me.”

Since that moment, integrating the liveliness and revitalization of West Coast Indigenous culture into settler society — getting it out from behind the glass — has been a mission for Tasi Baker.

The now 24-year-old member of the Squamish Nation recently brought some of the oral histories to life literally through a series of contemporary movement workshops.

Utilizing her background in choreography and professional dance, Tasi Baker introduced a series of Coast Salish Storytelling Movement Workshops on Sept. 28 as part of Culture Days in Vancouver.

“I really want the wider public audience to understand how advanced our ways of knowing and understanding the world are,” she said.

She presented to three legends that reflect her own teachings and diverse background —along with being Squamish, she is Musqueam, Tlingit, Kwakwa̱ka̱ʼwakw, Haida and Hungarian.

“I’ve really been figuring out how choreography can be used to raise the narrative, raise these ideas to a place where people can really understand each other and have more cross-cultural conversations,” she said.

“If we have respectful relations with each other, I think that could really help with a lot of issues in Western culture. … these legends, even though they’re 15,000 years old or older, have so many lessons for right now.”

The free workshops booked up quickly, and each consisted of a contemporary dance performance by Tasi Baker, followed by a group discussion about each legend and movement explorations.

The workshops were a pilot project, sponsored by the First Peoples Cultural Council, that she expects will be repeated in the future in some form since the demand was so high.

She first was recorded speaking the stories while she was working on a project with the Horniman Museum in London, England, in 2017.

She was in the city finishing her Masters of Science degree in Sustainable Urbanism and was approached by the museum to collaborate on an exhibit of Northwest Coast legends.

For the project, the museum brought to life three masks by artist Steve Smith in its World Gallery.

With the masks installed on storytelling posts, each figure tells its own story through interaction — for example, with Dzunuḵ̓wa, who is known for stealing children, you must hold her hand in order to hear the legend.

With bear, you step into her copper paw-prints.

And with Raven, you must touch a glowing orb representing the sun.

“They’re presented in such a fascinating way,” Tasi Baker explained.

“It is my voice (telling the stories) but to me, the masks have agency now, and that’s so much better than a mask behind glass.”

That exhibit is on long-term display, and Tasi Baker has collaborated to combine the legends she recorded with music for performances and the storytelling workshops.