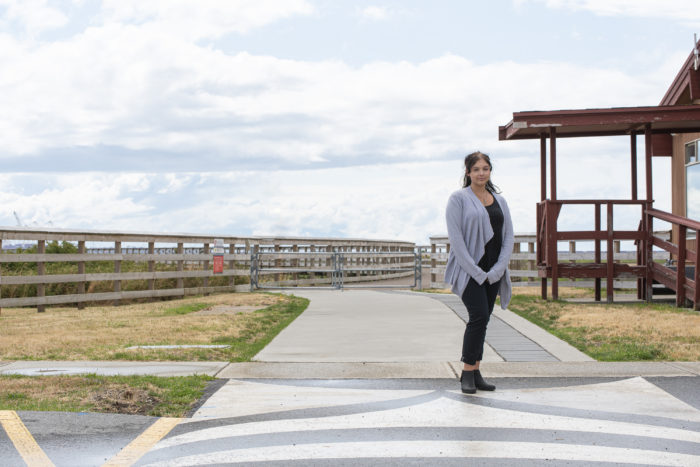 Above: Amy Lachance at TFN. Photo by Adrian MacNair.

Tsawwassen First Nation celebrated our 10-year treaty anniversary earlier this year and it got me thinking.

Just 10 years have gone by since our treaty effective date on April 3, 2009, and so many of us have witnessed a whirlwind of change that has transformed our community in front of our very eyes.

I think of the good old days, the days growing up on the “rez,” with the Tsatsu gas station and dirt piles and empty fields instead of shopping malls. Back then, I didn’t fully understand that changes had to be made for the better, that our home had perceived “faults” and things to be worked on.

I was a kid, so I was accustomed to how things were. I thought I had a full understanding of what living at TFN was like, so when the gentrification of my then-uneventful sanctuary began, I wasn’t sure how to feel at first. I knew it must be a good thing because that’s what we were constantly being told, but it was hard to fully grasp a concept that even some adults didn’t understand, especially when our home began to change so drastically.

My mom Kim Baird was chief when TFN was negotiating the treaty, and I witnessed how much of herself and her life she devoted to our community. No one in my family understood how my mom could possibly be so busy all the time! But I’ve come to learn it was a lengthy, difficult process — trying to negotiate for Tsawwassen’s rights — and I’d be lying if I said it didn’t take its toll on me and my family sometimes.

But when the treaty was signed, and the changing TFN was the talk of the town, I couldn’t help but feel the strongest sense of pride in my mom and in my community. There was this low buzz of anticipation and excitement and no one could’ve expected what was to come for our little reserve.

The changes within the community weren’t always appreciated by everyone but they were all part of the bigger picture and that’s something I grew to understand. I learned more and more about the history of my people, my language and the meaning of treaty and how it affects us to this day. I still have a long way to go and a lot to discover.

I was fortunate enough to grow up in a place of progression and my mother, alongside everyone in my community, set an outstanding example on how to push a community forward into better things, even when it’s scary or unfamiliar. My baby sister, Naomi, was born shortly after the treaty signing. My mom’s face glowed with a sense of accomplishment that I’ve rarely gotten the chance to see as she said, “Naomi is the first baby on TFN to be born in a Nation free of the Indian Act.” That is when I realized what a powerful thing we had accomplished.

I now recognize that change and adaptation is a necessary part of growing up. I recognize how far we’ve come and how far we must go and that things aren’t perfect, but they certainly are better. I’m aware a lot of problems need to be solved in our community and that might mean seeing a lot of differences between then and now.

But I know, no matter how many changes we see, we won’t lose ourselves in the process of establishing our independence. We remain the same Tsawwassen we always were: A land where we help and support each other, we thrive in the face of adversity, we adapt, we welcome each other with open arms and food on the table and in that way we will never change. This will always be our land facing the sea, and it’s something to be proud of.

Amy Lachance is a 15-year-old member of Tsawwassen First Nation. This article originally appeared in the TFN newsletter and is reprinted here with permission and minor edits.