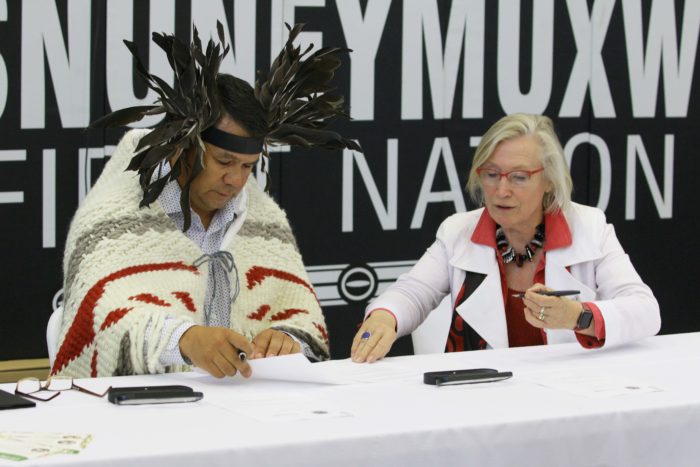 Snuneymuxw has signed a Letter of Understanding with Canada that acknowledges the nation’s rights and title under the pre-confederation Douglas Treaties.

Snuneymuxw and the Crown entered into the Douglas Treaty on Dec. 23, 1854, as part of a series of oral and written treaties on Vancouver Island.

The treaties affirmed nations’ land title and various other rights, but they have been largely ignored by government until recently, despite various court cases that have uplifted their validity.

During the event in the Snuneymuxw gymnasium, Wyse spoke of how his nation’s treaty rights have been denied by the Canadian government for more than 150 years.

“Today this history of denial changes,” he said.

“The future will be one will full partnership and prosperity.”

The Letter of Understanding outlines a “first step” towards concrete progress, according to a press release from Canada.

Outlined in the letter are unresolved matters under the Douglas Treaty related to historic village sites, hunting and fishing rights, governance over lands and resources and more.

Bennett said the letter will be “a clear pathway to resolve issues that have been outstanding for many years.”

As a first priority, Bennett said Canada will reach an agreement with Snuneymuxw to transfer a 180-acre “Camp Nanaimo” property near Vancouver Island University — formerly used by the Department of Defence — back to the nation.

Wyse said getting that property back will build the community’s currently small reserve lands and give Snuneymuxw citizens an opportunity for better resources and services.

“Our people agreed to welcome settlers in our territory provided we maintained our villages and fields, waters and could sustain our way of life,” he said in a statement.

“The affirmation of our historic treaty with the Crown, entered into by Governor James Douglas on behalf of the Crown in 1854 and upheld by our peoples over time, is of utmost significance today and into the future.”