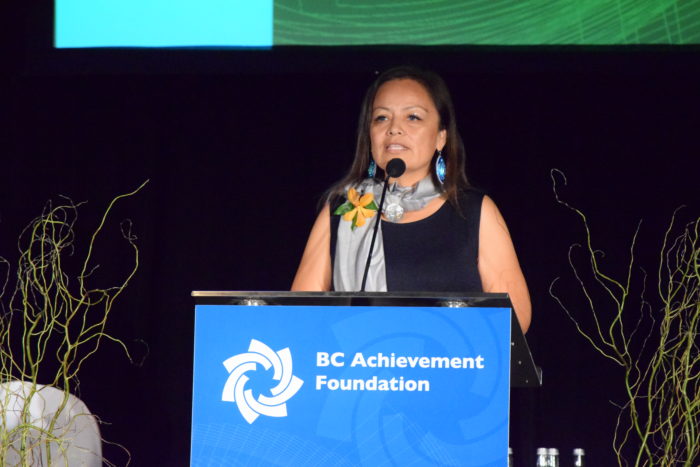 Above: Stz’uminus Coun. Roxanne Harris speaks at the BC Achievement Gala

A total of sixteen businesses, entrepreneurs, partnership entities and community-owned enterprises were honoured during a gala dinner event in downtown Vancouver on Oct. 17.

The event hosted by BC Achievement Foundation was hosted by Musqueam siblings Larissa and Wade Grant, and drew more than 650 guests from across the province.

In one of the first awards of the night, Paul Natrall of Squamish Nation was given the Young Entrepreneur of the Year award for his business, Mr. Bannock.

Natrall first officially launched his food truck featuring Indigenous fusion cuisine in early 2018 and has been in demand among bannock lovers across the Lower Mainland and beyond — including serving a couple of thousand people on National Indigenous Peoples Day.

“(We’re) Vancouver’s first Indigenous food truck, so it was huge for the city, and everyone’s been enjoying Indigenous cuisine,” Natrall said while accepting his award.

He said he has been specializing in Indigenous cuisine for about a decade and that the best thing about being an entrepreneur is being able to share his food and traditional knowledge.

The Ladysmith-based business was honoured in the “outstanding business achievement” category for Community-Owned Business of the Year – Two or More Entities.

Several Stz’uminus members attended the event, and Coun. Roxanne Harris accepted the award on behalf of the community.

“I just want to say thank you to all of our Stz’uminus First Nation membership who believe in us, who push us forward to achieve higher, and achieve more and be the best that we can be,” Harris said.

“We’re striving for more, we’ve set the bar high for ourselves, and … our goal is to make our nation self-sustaining through economic development.”

The awardees of the BC Indigenous Business Award are nominated, then selected by a jury, which this year included Kim Baird, Jacob Beaton, Louis de Jaeger and Laurie Sterritt.

BC Achievement Foundation chairwoman Anne Giardini said the awards aim to recognize enterprises that “create and expand opportunities, relationships and communities” for a prosperous future.

“BC Achievement is particularly excited to highlight some of the many Indigenous businesses across British Columbia that foster innovation,” she said. “Integrating the practices of the past with the economies of the future.”

More information is available at www.bcachievement.com.