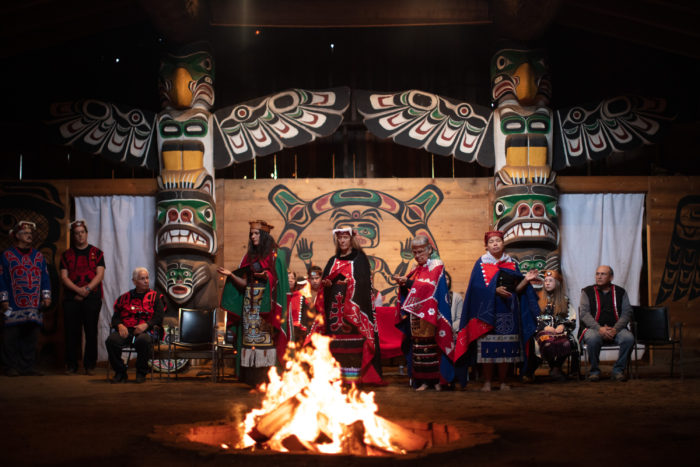 The Witness Blanket has settled into its final home in Winnipeg after a ceremony in the K’ómoks First Nation bighouse.

Now, a book and film are being released about the process of creating the art installation, which documents stories and pieces from Canada’s residential school system.

The piece by Carey Newman (Hayalthkin’geme) was shaped from more than 800 items collected from survivors from, and sites of, residential schools across the country.

The 12-metre long Witness Blanket consists of cedar frames that display the many objects, including: an unknown child’s shoe found at a site in the Yukon, the door to the former infirmary at St. Michael’s in Alert Bay and various “proficiency badges.”

Newman — who is Kwakwaka’wakw, Coast Salish and European —travelled across the country with his team meeting survivors, collecting the objects and engaging in ceremony, while documenting the process.

“When we went out into communities and asked people for things they gave us so many different kinds of pieces,” he said during an event at the Vancouver Writers Festival on Oct 24.

“That enriched the story and the artwork to a degree that I wouldn’t have been able to imagine.”

After the blanket was complete in 2014, it spent four and a half years travelling around Canada.

“It’s been from coast to coast,” Newman said.

“Recently we settled it into its final home at the Canadian Museum for Human Rights in Winnipeg.”

In order to protect the Witness Blanket, the museum has entered into an agreement with Newman that give the Blanket rights as a legal entity — meaning there is no ownership being given, but it will be given lodging and restoration at the museum.

The legally-binding agreement is groundbreaking because Kwakwaka’wakw traditions and governance and Western contract law have been given equal weight.

“Rather than trying to decide our rights, we put the rights with the Blanket and the stories that were given to us by survivors,” Newman explained in a statement.

“We didn’t want to treat it like a transfer of property because I don’t feel ownership of the Blanket, I feel responsibility towards it and I wanted to make sure the museum felt this too.”

The agreement was finalized during a historic ceremony at K’ómoks on Oct 16 that was facilitated by chief and spiritual leader Wedlidi Speck, head of the Gixsam namima clan of the Kwagul people.

During the ceremony, both Newman and Canadian Museum for Human Rights CEO John Young stated their purpose and intentions for the stewardship of the Witness Blanket, before engaging in a feast in the potlatch tradition.

The museum is now working to restore the original Witness Blanket for an upcoming exhibition, while a travelling photographic replica of the artwork will continue to tour communities.

Meanwhile, a new book titled Picking up the Pieces: Residential School Memories and the Making of the Witness Blanket has been released by Newman and his co-author Kirstie Hudson.

The book was officially launched at the Canadian Museum for Human Rights on Nov 20.

A documentary film about the Witness Blanket has also been produced and is now being distributed for educational purposes.

Young said the Blanket said the work is significant to people across Canada because it makes the realities of the residential school system tangible for those who didn’t experience it.

“Its stories, its objects and what they represent help us better understand this issue in terms of human realities and consequences instead of being just an abstract concept,” he said in a statement.

More information about the Witness Blanket and upcoming tours can be found at www.witnessblanket.ca.