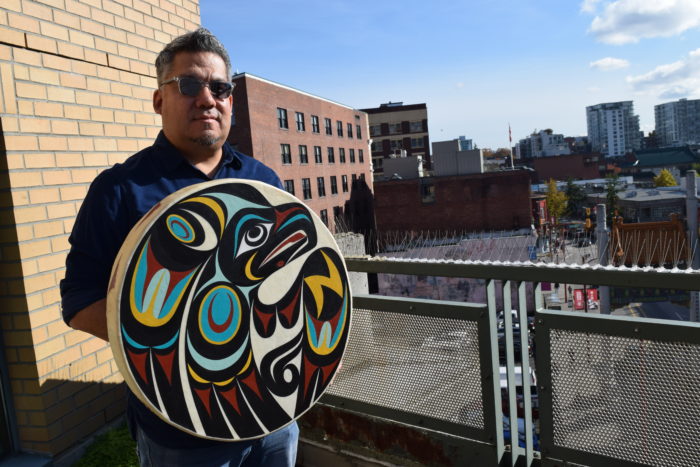 Above: Maynard Johnny Jr. displays his piece ‘Thunder Matriarch’ while standing on the roof of Skwachàys Lodge in downtown Vancouver. Photo by Cara McKenna.

The Penelakut and We Wai Kai artist received a Fulmer Award in BC First Nations art during a ceremony in Vancouver on Nov. 21.

During the event, guests heard that Johnny Jr.’s nearly three-decade-long career has included highs and lows, but that he is now a mainstay of Salish art and its revival.

“The fact that I can share the beauty of my people, of my Coast Salish culture, with the rest of the world, that’s something I have to pursue, still,” he said in a video played at the ceremony.

The Fulmer Award goes to group of artists each year from around the province, who are selected by a jury panel via the BC Achievement Foundation.

A display of work by the six recipients was also shown at the 13th annual awards, including three colourful prints and two drums painted by Johnny Jr.

BC Achievement Foundation board member Sophie Pierre said the six artists “have worked hard to re-establish and develop artistic traditions, while representing the continuing vitality of First Nations communities throughout the province.”

The award comes as Johnny Jr. is wrapping up a three-year artist residency at Skwachàys Lodge in downtown Vancouver.

The hotel has a program for Indigenous artists, where they are given a subsidized living space and access to its large basement studio.

During an interview at the studio, shared with artists of various nations and trades, Johnny Jr. spoke about the resurgence of Coast Salish art — known as the “Salish Renaissance.”

Coast Salish art wasn’t often seen for many years in favour of Northwest Coast styles, and was only brought back to the mainstream in the last few decades.

Musqueam artist Susan Point was one of the pioneers, producing Coast Salish art in the early 1980s, and was followed by other Salish artists who saw what she was doing and were also inspired to pursue the style.

“I’m pretty proud to be a part of the Salish Renaissance,” Johnny Jr. said.

“Susan broke the barrier of getting Coast Salish art to the mainstream market. … She kind of opened the door and I was right behind her (with others).”

The desk where Johnny Jr. works is arrayed by bottles of paint and empty coffee mugs —surrounded by in-progress paintings on canvases, paddles and drums.

The pieces, when complete, will go into galleries, or be listed for sale to private collections. He has designed logo and identity pieces for organizations, TV series and movie sets. His art was adorned on cedar boxes given to special Canadian Juno Music Awards guests in 2009, and his work can be found in collections around the world.

Johnny Jr. has become known for the contemporary way he works with colour — often fitting seven to nine different shades into one image — and the way he can work the designs within odd shapes.

He often paints on paddles and drums as well as canvases, aiming to create unique designs that are inspired by traditional Salish styles and stories, peppered with a Kwakwaka’wakw touch.

“I try to do something that no one else is doing,” he said.

“For a long time I didn’t realize how good I was at designing images within (different shapes), whether it be a circle, a rectangle, a paddle, a drum. Making it fit and filling in pretty much the whole shape but still making it flow.”

He recently painted a surfboard with a salmon design for Alcheringa Gallery in Victoria, and often paints long rectangular canvases with designs such as the moon, wolves and eagles.

He is often inspired by his family, particularly his mother, daughter and granddaughter — he recently painted a drum which features a female Thunderbird and honours Matriarchs.

“Everything about this design was so special to me,” he said, cradling the drum.

“I’m going to give it to my granddaughter when she’s ready. She’s only two.”

Johnny Jr. lists many Salish artists who influence and inspire him, but he largely taught himself to paint and draw over the years, looking through books about Indigenous designs and studying the work of other artists.

When he was a kid, he would replicate comic book art and draw fighter ships from the show Star Blazers.

“My mom couldn’t believe how detailed it was. She really encouraged me. She would just give me paper and let me draw whatever, I just loved drawing.”

With his mother’s encouragement, Johnny Jr. kept up the hobby into the high school he attended in the Cowichan Valley, where his art teacher encouraged him to try Indigenous designs.

He ended up creating his first Indigenous design on a door skin that was donated to the school for a class art project.

“I just decided to learn,” he said, having found a book of First Nations art to refer to in the classroom.

The piece was then displayed at a local cultural centre, where Johnny Jr. recalls it was actually shot down by a non-Indigenous man who worked for the art program there.

“(He) was like, ‘you’re never going to be a good artist. I wouldn’t focus on being an artist. You don’t have it,’” he remembered.

“Without getting too deep into it, back in those days when I was 17, when a white person talked to you that way, you took it as truth. … I was so hurt and I believed it.”

He said even though he almost quit because of it, his mother kept him afloat, encouraging him to continue the practice.

Years later, he returned to the cultural centre, where his work was displayed again — this time having established himself.

“I think a lot of our people went through that … when someone who you think is of authority tells them something like that and you just go with it. No, man, you can’t let that take you down.”

Johnny Jr. now speaks in various classrooms teaching Salish design, and has a goal to work with more Indigenous youth, specifically in his home community — helping them and encouraging them to pursue art like he did.

“There are so many kids out there who are like me,” he said.

More information about Johnny Jr.’s artwork and upcoming exhibitions can be found on his Facebook page at www.facebook.com/salishman.