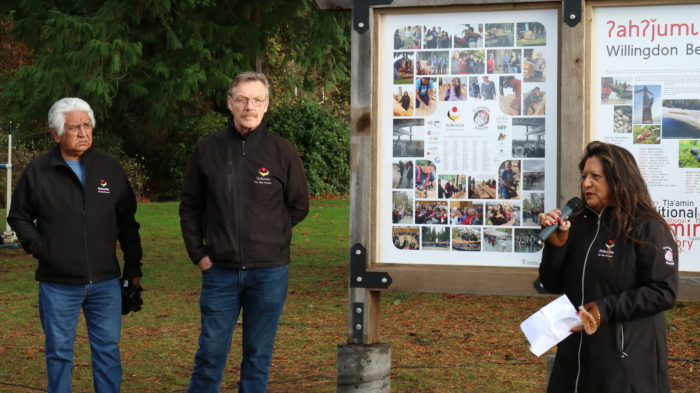 New signs have been unveiled in Tla’amin territory as a way to commemorate the Hɛhɛwšɩn carving project.

The six-panel sign on Willingdon Beach now sits on the spot where carvers worked with the public to shape two canoes in a process that began in 2017.

Hɛhɛwšɩn, meaning “the way forward,” is an initiative that officially began with the canoe carving but has encompassed a larger reconciliation initiative between Tla’amin and larger community.

The Hɛhɛwšɩn group led the sign project to commemorate the ongoing work and to give the nation a larger presence on the beach. The signs were unveiled in a ceremony on Nov. 17.

“The gathering at Willingdon Beach worked to raise awareness of the history of Tla’amin,” the statement said.

“Our non-Indigenous neighbors were invited to participate in this act of reconciliation.”

“Our goal is to support the survivors and families and to fully understand the nature, causes and the extent of colonialism,” the statement said.