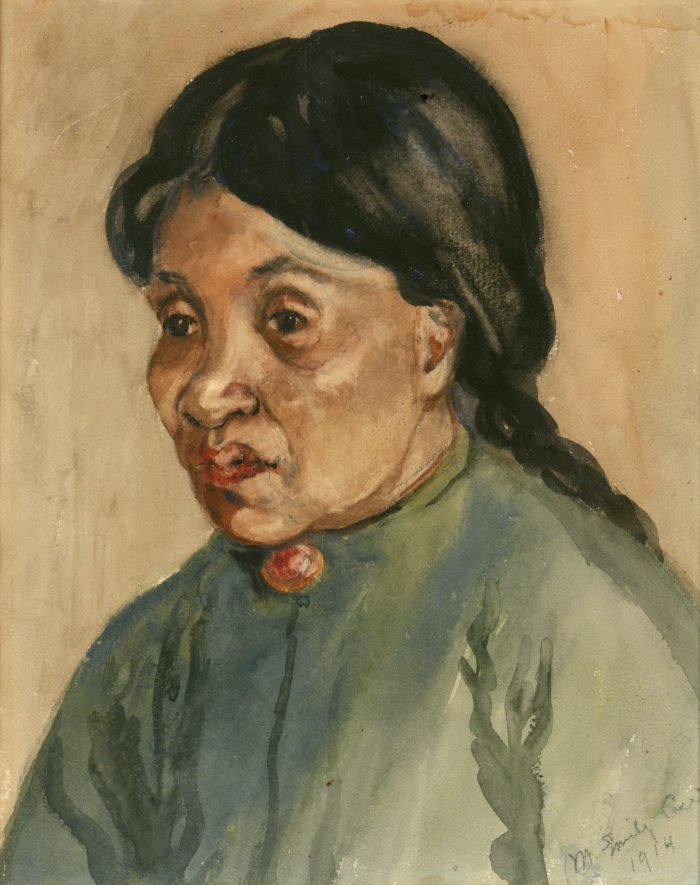 A complex friendship between a famed Canadian artist and a Sḵwxwú7mesh basket weaver is being featured in a new exhibit at the Vancouver Art Gallery.

The paintings of Emily Carr and weavings of Sophie Frank (Sewinchelwet) are on display alongside each other as part of a wider exhibition called lineages and land bases.

Lineages and land bases features more than 80 pieces from that gallery collection — together exploring at nature, culture and the ways in which various worldviews are informed.

The room in which Carr and Frank’s historical works are featured stands in contrast to the contemporary work in the surrounding exhibit, explained the gallery’s Senior Curatorial Fellow of Indigenous Art Tarah Hogue.

Hogue said the space features the “remarkable and complex story” of a three-decade relationship between Carr and Frank, who were born about a year apart and first met in Vancouver in 1906.

“Sophie would travel from Eslhá7an, or the Mission Reserve, into the city every day with her children to try and sell or barter her baskets,” Hogue said.

Frank had knocked on Carr’s door to offer her baskets, and the two became friends — sharing artistic practices and writing letters to each other. Carr painted a portrait of Frank, and wrote about her in her first publication “Kleewick.”

The portrait and book are featured in the exhibition alongside historical letters and photos.

Also on display are three baskets by Sḵwxwú7mesh weavers — Frank, Chucháwlut (Mary Ann August) and Sut’elut (Monica Williams) — in a glass case in front of nature paintings by Carr.

As part of the exhibit, Hogue worked with Sḵwxwú7mesh advisors Bill Williams and Tracy Williams to create a balanced display that accurately represents both women.

Tracy Williams is a fifth-generation cedar weaver who contributed her dance apron and headband to the exhibition. While Bill Williams is Frank’s great-grandnephew and speaks in a recording about what he knows about Frank and her relationship to Carr.

“They were about the same age when they met each other, Emily looked at the work that Sophie did and … said, wow, that is really intricate work,” he said.

“In their continued discussions they really enjoyed each other’s company and the dialogue they had.”

Williams said that Frank even helped Carr with her use of the colour green in nature, taking her to what’s now known as Stanley Park during three different times of day to look at the changing tones in the trees and grass.

“So Sophie showed Emily that when you look at nature it isn’t one colour, it’s multi-coloured and different hues depending on what kind of day and how you want to show off that plant or tree,” he said.

Williams also said it was unusual at the time for a Coast Salish woman to be going around as a travelling salesperson — Frank lived in a time where practicing culture was illegal under the Potlatch Ban and as a ward of the state.

Hogue said it was also important to represent the complicated relationship that Carr had with Indigenous cultures.

“So you have an earlier painting by Carr when she was documenting Indigenous cultures that she travelled to, as well as a very small selection of ceramics by Carr that appropriate Indigenous design motifs,” she said.

Lineages and landbases opened on Feb. 22 and will be on display until May 26. It is on display alongside an exhibit of pencil crayon and ink drawings by Inuk artist Shuvinai Ashoona called Mapping Worlds.