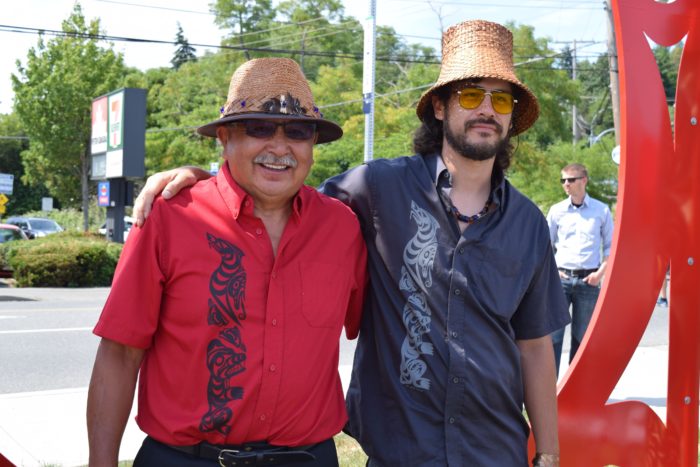 Above: Elder William Good (Tseskinakhen) and his son Joel Good stand with Snuneymuxw house posts they carved at St’litlup in 2018.

As we find ourselves living during a global pandemic and adjusting to the new normal of COVID-19, I have had a story about the smallpox epidemic lingering in the back of my mind. I have heard my father William Good (Tseskinakhen) tell this story a number of times in my life. It is a story of grave significance and it has always resonated with me, especially with the impact in which my father delivered it in times of need and great community pain.

Growing up with my dad — who is a Snuneymuxw master artist, hereditary chief and traditional storyteller — my siblings and have been privy to glimpses of the past through art and storytelling with deep revelations of oral history of this region. That history was passed on by our father’s grandfather and namesake — the late William Good, the eldest son of Chief Louie Good, son of the chief of the seven amalgamated tribes of Snuneymuxw. Although it is several generations away, the oral history connects us to that time and allows my father to share how the story was told.

While living in such uncertain times amidst a pandemic in 2020, it has caused me to think that now is the time for my father to share his story of how smallpox affected us locally. Although I knew the story, I still relied on having him tell me the story again, seeking approval and accuracy to document it. When I hit the record button on my phone, he shifted into a recall mode and he delivered the story intact — due to this intensely repetitive process of the teachings in his young childhood by his grandfather in the 1950s.

Here is the story, according to William Good:

“The white people handed out smallpox blankets, [which were] Hudson’s Bay blankets and they gave them to all of the nations here [on the Coast]. There were two tribes on Gabriola [Island], one on the East side and one on the West side. The one on the East side of the Island did not always get along with Nanaimo and they warred quite a bit. They had to have quite a population to war with Nanaimo [which was known to be 10,000 people]. When they gave out those smallpox blankets, there were a few people who were on the East side of the island who when they woke up, everybody [in the entire village] was dead. There was just a small canoe full of them [left], so they figured they would paddle over to the West side of the island to ask if they could amalgamate and stay with the other tribe on Gabriola, and when they got to that side of the island, the whole nation was [also] dead. So, they didn’t really get along with Nanaimo, but they had no choice. They decided they better go ask if they could stay and amalgamate to the Nanaimo tribe, and they paddled over on their one small canoe.

They were crying as they paddled over to Nanaimo and when they arrived, they told their story to the Nanaimo people and [they] let them stay and amalgamate to Nanaimo. Those two families are still a part of the Snuneymuxw people today.”

Amalgamation and adoption was a customary practice within the Hul’q’umi’num Law system that paralleled the systems among other nations along the Coast. A request could be made to the chief to be adopted and amalgamate to the new nation, despite not being from there, and if the chief agreed and accepted them, that person then became that nation.

This story teaches us to accept others as our own, even if they are our adversaries, and we are to care and love one another. The moral is to have compassion in a time of need and to work together despite our differences.

Although living in the COVID-19 pandemic has evoked many different feelings, especially in reflecting on the smallpox epidemic, it serves as a reminder of the wonder of the resilience that is born in the face of adversity. Living in a global pandemic is difficult and challenging, and it is our hope that we are able to find ourselves extracting good from tragedy and that we can live in love and unity as the human race.

Aunalee Boyd-Good is a co-founder of Ay Lelum – The Good House of Design, a second-generation Coast Salish Design House from Snuneymuxw First Nation. She holds a Bachelor’s in English from Vancouver Island University.